Local ancestry-informed frequency data is available for bi-allelic variants with low genotype missingness (i.e., call rate > 0.9) and an allele frequency greater than 0.1% within the Latino/Admixed American gnomAD population. The 7,612 samples contain all samples classified as Latino/Admixed American within gnomAD v3.1 with the exception of samples from the Human Genome Diversity Project, which were used in the local ancestry reference panel for training purposes. We anticipate this finer resolution of allele frequencies will improve the interpretation of variation in individuals with similar genetic ancestries by contextualizing variants to the appropriate continental reference population.

Admixed American populations have a complex ancestry makeup resulting from historical admixture events from several continental areas. In the case of Latino populations of the Americas, this admixture is a consequence of the long-distance migration of ancient populations through the Bering Strait from East Asia around 15,000 years ago, European colonization in the Americas (late 15th through 18th century CE), and the transatlantic slave trade from primarily west Africa (16th to 19th century CE), as shown in the map below. The figure also demonstrates two admixture events and what a modern day chromosome from a Latin American individual may look like multiple generations after these events. gnomAD’s global ancestry inference assigns this individual to the Latino/Admixed American population, but we know these demographic histories create extremely diverse mosaic genomes across individuals within this broader population grouping. 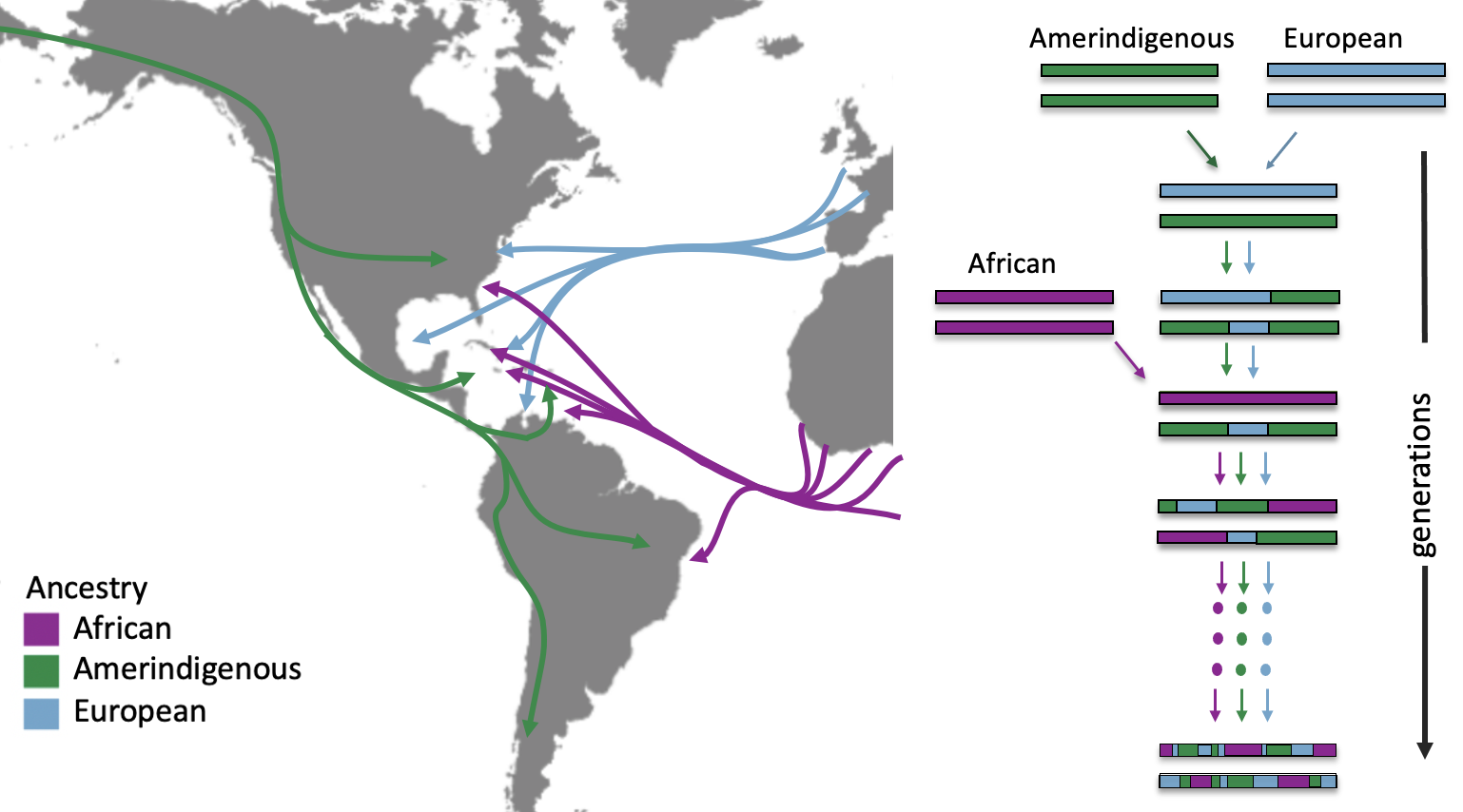 This illustration shows a single chromosome from three individuals, with non-reference alleles at 3 sites of variation (indicated by G, C, and A). After performing local ancestry inference, we can see that Allele G is only found on the green ancestry, Allele A only on the purple ancestry, and Allele C can be found across all three.

To infer local ancestry data in the gnomAD Latino/Admixed American populations, we built an open-source local ancestry inference pipeline. The figure above shows a schematic of the software pipeline with four major steps: phasing, local ancestry inference, ancestry extraction, and VCF generation. We use Eagle for phasing, as it is the most computationally tractable at this scale. We use RFMix v2 for local ancestry inference, which requires a reference population panel representative of the continental ancestries that are likely to appear within the sample population. Our reference panel was composed of the Human Genome Diversity Project samples from America for the Amerindigenous component, as well as a subset of EUR and AFR samples from the 1000 Genomes Project for the European and African components, respectively. To extract ancestral segments and calculate minor allele dosages, we use the tool Tractor. Finally, we generate VCFs using a Python script that utilizes the Hail library. The entire pipeline is unified using the Hail Batch Python module for scalability.

We validated this pipeline by comparing global proportions in the gnomAD Latino/Admixed American population estimated by ADMIXTURE to the results of our LAI pipeline. On the x axis is the proportion of Amerindigenous ancestry in individuals as determined by the tool ADMIXTURE, and on the y axis is the Amerindigenous proportion of ancestry in individuals as determined by RFMix. There is a strong correlation between these proportions (r=0.98), which gives us confidence that our pipeline performs well. 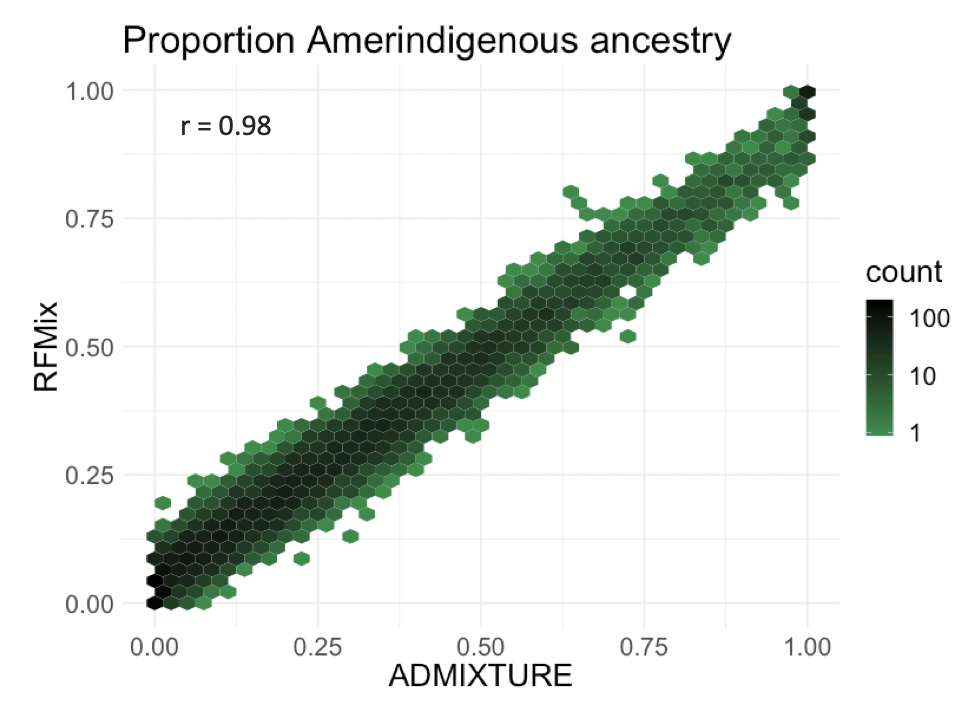 We tested the pipeline’s sensitivity using a simulated admixed American truth dataset. In the plot below, the x axis is binned proportion ancestry while the y axis is the true positive rate. For African and European ancestries, the pipeline’s sensitivity increases from 90 to over 98% as a sample’s ancestry proportion increases; however, we do not see this correlation for the Amerindigenous ancestry, as finding samples to use in the reference panel remains a challenge. 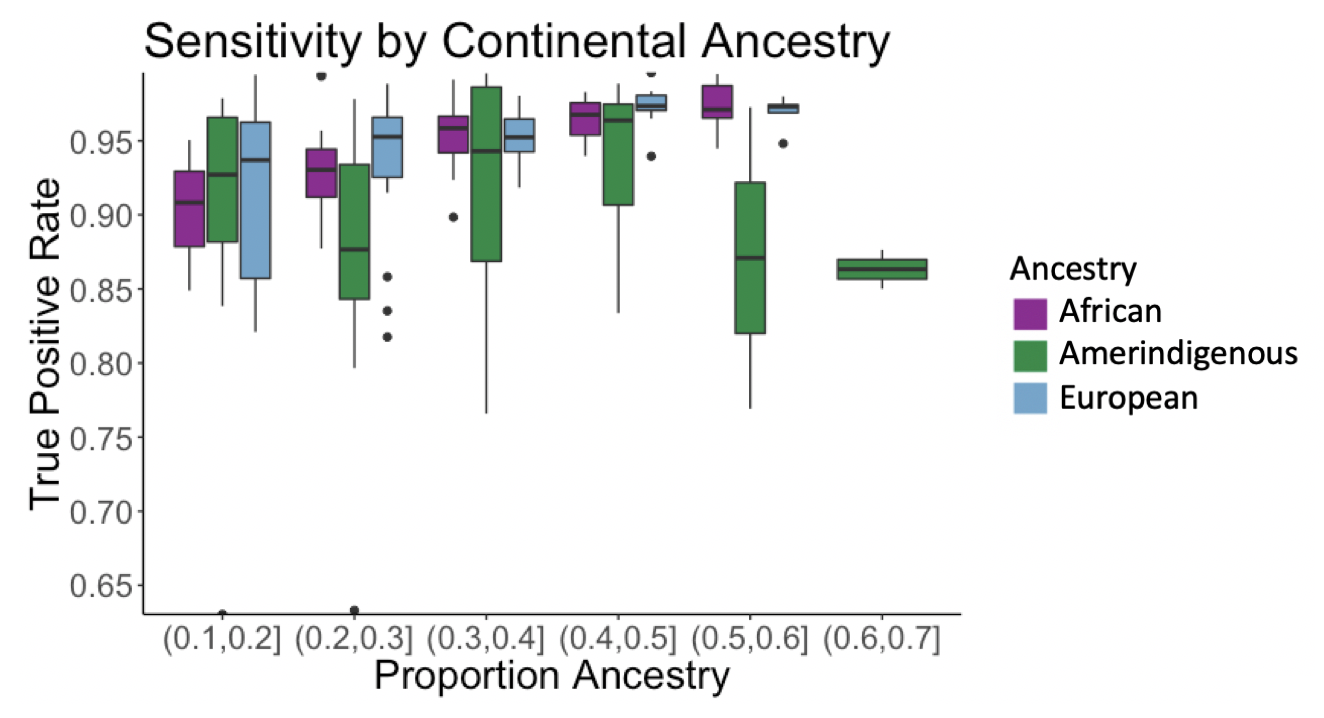 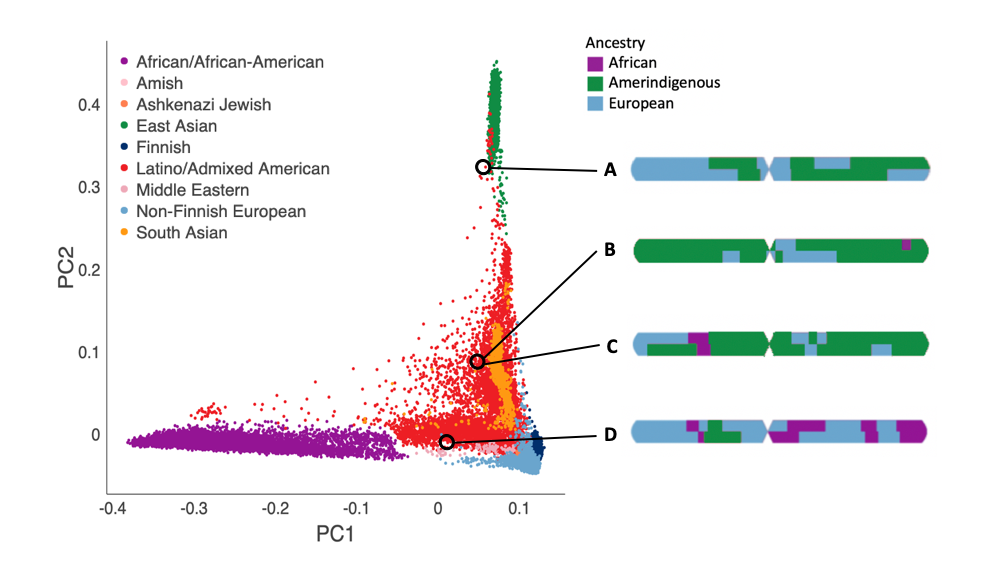 Using local ancestry data, we can now look at the fine-scale ancestry makeup for inferred Latino/Admixed American individuals in different regions of the figure. The figures on the right are painted karyograms of a single chromosome from an individual within each circle. Using the local ancestry data, we can see individual A is two-way admixed: Amerindigenous and European, while individual D is three-way admixed: African, Amerindigenous, and European. Even when we look at two individuals who occupy the same position in PC space, individuals B and C, we can see how different their genetic ancestry actually is at a local level. This underscores the importance of better resolving ancestry in admixed samples, to calculate allele frequency estimates within continental ancestry tracts, which generate more accurate allele frequencies than the aggregate Latino/Admixed American grouping.

We have also made the gnomAD LAI data available as a VCF. The VCF contains all variants with available LAI data and includes ancestral AC, AN, and AF as well as the variant’s continental allele frequencies for the gnomAD African, East Asian, Non-Finnish European, and the Latino/Admixed American populations.

With this data, we expect to find some disease-relevant variants to occur at elevated frequencies within specific ancestral components because of bottleneck events in a population’s history. An example of this is the gnomAD variant 17-7043011-C-T in the SLC16A11 gene. Variants within this gene have been shown to be a common risk factor for type 2 diabetes in Mexico by the SIGMA consortium. 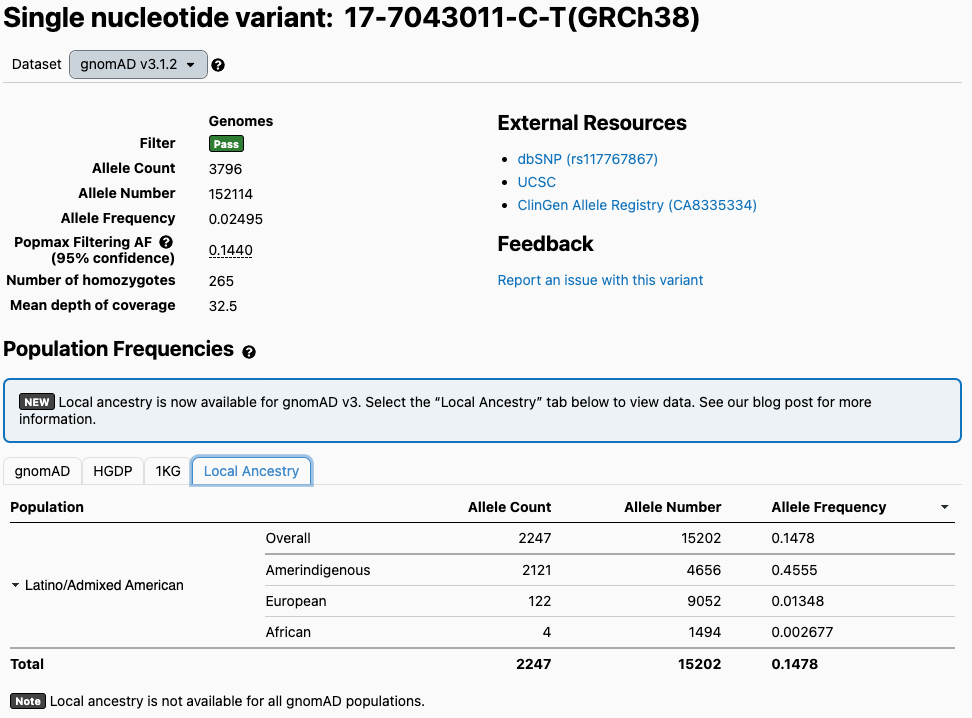 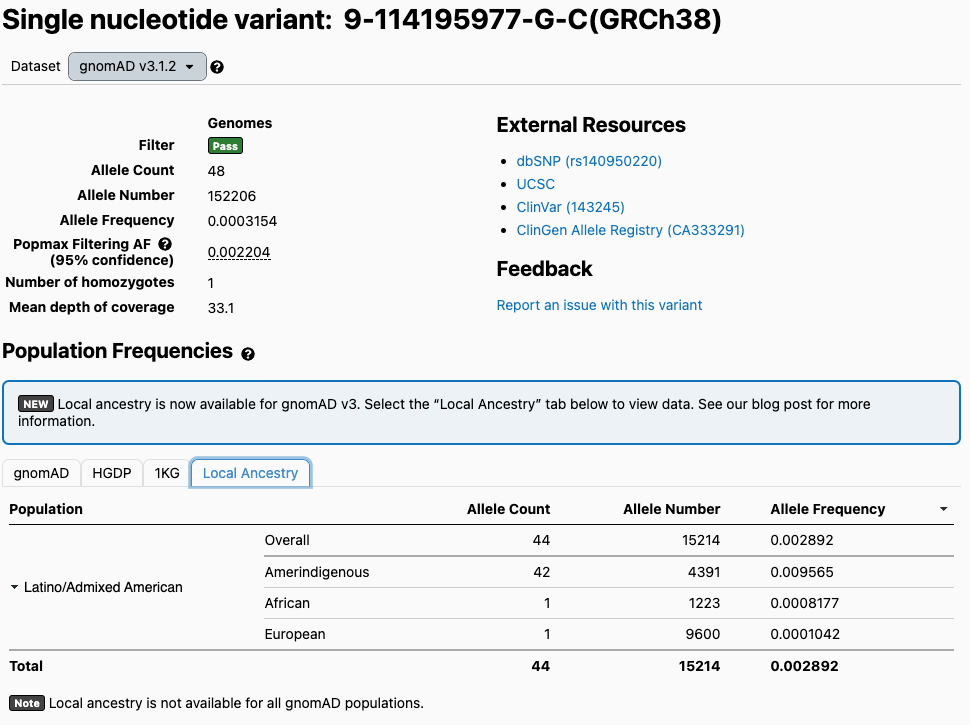 Local ancestry inference in admixed individuals provides higher resolution and more accurate allele frequencies for each continental ancestry. This release of local ancestry-informed frequency data is currently available for the Latino/Admixed American sample. We plan to continue this effort for the African/African American sample within gnomAD in the near future. We hope this data can be used to enhance the scientific community’s ability to understand the origin of human variation as well as clinically interpret variation and better identify those populations at highest risk for certain diseases.